This website is not compatible with Internet Explorer. Some features might not work correctly in this browser.

We recommend that you use the latest version of Chrome, Firefox, Microsoft Edge, or Safari for the best browser experience.

The NSW Swifts are delighted to unveil the club's 2021 Indigenous Dress which has been designed by local pathway athlete Tarsha Hawley.

Hawley, a proud Aboriginal woman from the Wongiabon people, is a current member of the QBE Swifts Academy which underpins the senior team.

Based in the Hunter Valley, she originally hails from Nyngan in central NSW and represents the Central Coast Heart in the Netball NSW Premier League.

"As a proud Indigenous women I feel very privileged to have been given the opportunity to design the NSW Swifts' Indigenous dress for 2021 Season," Hawley said.

"This year I am truly appreciative of the opportunity I have been given to be a part of the QBE Swifts Academy Athlete program. I am hoping that I can inspire other Indigenous girls to follow their dreams, work hard and dedicate themselves to achieve what they truly desire.

"I hope looking into the future we see our people represent our culture by being identified amongst some of the Suncorp Super Netball teams and the Australian Diamonds.

"Coming from a small rural community, I hoped that one day that my dreams could be possible, I would of never imagined to be where I am today. It has taken a lot of hard work and determination but I feel truly blessed to have achieve what I have done so far." 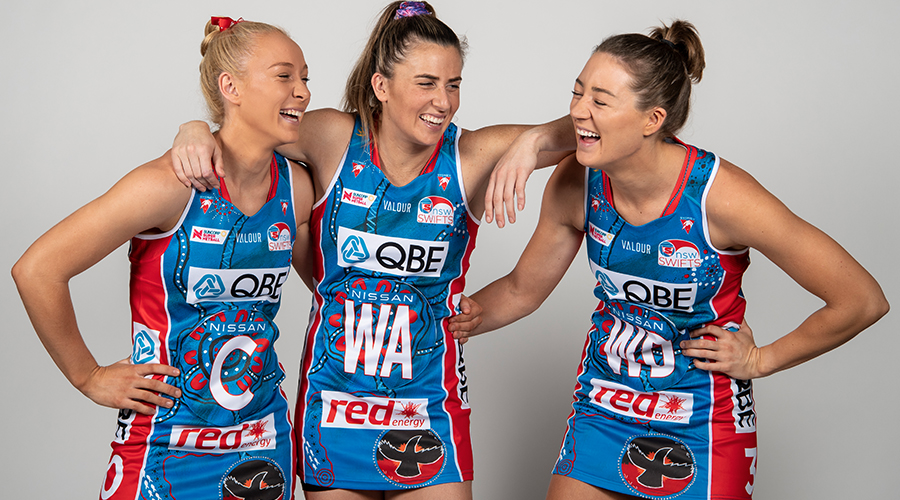 A distinctive feature of Hawley's artwork is the totem of the Wongiabon people, the crow.

"This is very personal to me and where I come from... behind the crow is the Aboriginal flag, these are two important parts of my culture and heritage: knowing where I come from, and embracing who I am."

Unique to the dress's design in the incorporation of circular bibs, which Hawley uses to describe the coming together of the Swifts.

"The concentric circle represents a meeting place and gathered around that are ten women who symbolise the Swifts.

"The lines that connect with the women are lines representing their journey, each line is a different length because no athlete's journey is the same. Some short, some long, some with setbacks, some paths take longer than others to achieve... but together each athlete brings their own unique story to the team."

Other standout features of the design are water holes and hand prints, which have personal and wider meaning for Hawley.

"I’ve used handprints which symbolise youth within this story.... acknowledging the next generation of young Indigenous girls who aspire to be professional athletes one day.

"The waterhole represents my hometown, the roots of my culture and the beginning of where my life began.

"Nyngan is an Aboriginal word said to mean ‘long pond of water’.  Along the side of the waterhole are fish, which also interacts with the Traditional Owners of the land of which Sydney Olympic Park, home of the Swifts is based. This is the land of the Wann Clan tribe."

The Swifts will wear Hawley's design against the Collingwood Magpies this Sunday when the sides meet in Round 5 of Suncorp Super Netball, and in next weekend's blockbuster NSW Derby against the Giants at the same venue.

ABOUT SUPER NETBALL INDIGENOUS ROUND

First Nations peoples and cultures will be recognised and celebrated across the Suncorp Super Netball League in Rounds 5 and 6.

The round is split over two weeks so all eight Suncorp Super Netball clubs can showcase their engagement with Aboriginal and Torres Strait Islander communities in front of their home crowds.

Indigenous Round has been a feature on the Suncorp Super Netball fixture since 2018. It is an opportunity for the sport of netball to recognise the histories, cultures and contributions of Aboriginal and Torres Strait Islander peoples.

To commemorate the occasion, all eight clubs will wear specially designed dresses and cultural performances will be incorporated into match day activities.

Netball Australia, the Suncorp Super Netball League, the Australian Diamonds and the Confident Girls Foundation are committed to reconciliation, within the netball community and beyond.

Swifts dominate Firebirds and get back to winning ways

Akle: You give any side an inch, they take a mile